The Ox Road of Hærvejen

In Herning and Ikast-Brande, we are proud that the Ox Road runs through our area via Engesvang and Stenholt Skov, and Nørre Snede.

The Ox Road is an antidote to everyday life. The route provides reflection, presence, and lots of fresh air, amidst nature, space and calm. Traveling along the Ox Road gives you the chance to disconnect from modern life for a while, forgetting about smartphones and deadlines, just allowing yourself to be present in the moment.

Today, Hærvejen is best known for its 500-kilometer hiking and bicycle trails through Jutland. However, a long time ago, before the advent of cars and trains, Jutland’s main road went along the watershed here and up through the country from the German border to Viborg. At that time, Hærvejen consisted of a complex network of smaller roads made from humble gravel and dirt. When one road had been overused and was no longer passable, people just made another road, which led to the creation of a grid of many smaller roads. This is what we today refer to as the Ox Road of Hærvejen.

Where can you find Hærvejen?

Hærvejen runs across Jutland and stretches from Hirtshals and Frederikshavn in the North to the German border in the South. The middle part of Hærvejen passes through Engesvang and the forest of Stenholt Skov, and Nørre Snede, among others. 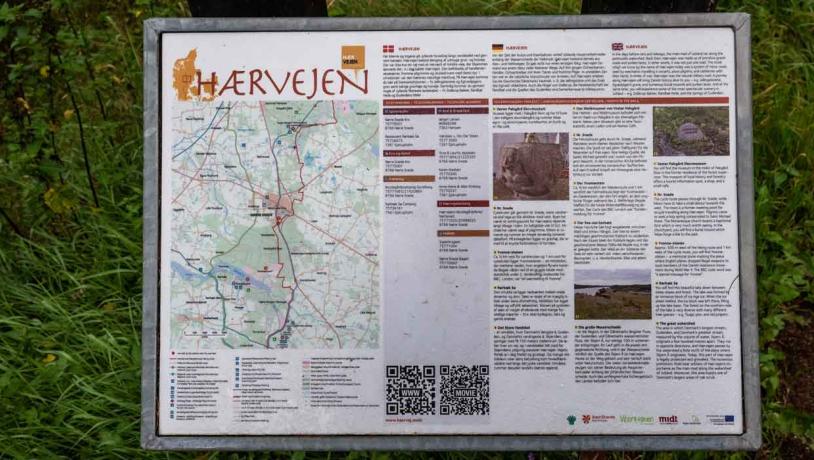 The story of Hærvejen – including trade and pilgrimages

The many tumuli along the road show how important Hærvejen was as a water route and trade route throughout history, probably even as long ago as the Early Stone Age.

Hærvejen was used by merchants, who transported flint, amber, hides, honey, black pots from Jutland and ox to Central Europe. It was also used by religious pilgrims visiting the grave of the apostle in Santiago de Compostela in Northern Spain, St. Peter’s Basilica in Rome or those on their way to Jerusalem. Last but not least, the road was used by armies as well, which is why there are so many moats along the route.

Hærvejen has had many other names in the past: The Steers’ Road, the Ox Road, the King’s Road, the Roman Road or simply ‘the road’. In the Southern part of Jutland, the road is still often referred to as the Ox Road. On the route from Viborg to Dannevirke, the name Hærvejen has been in use since 1930.

On this 6.5km long stretch of road from Vester Palsgård Skovmuseum to Nørre Snede, you can experience the old pilgrim church in Nørre Snede with the world-famous, Roman granite baptismal font that is considered to be one of the country’s finest. It has been exhibited in Berlin and New York, among other places.

Start at the Vester Palsgaard Skovmuseum museum, which is located in the middle of the Skov forest near Hærvejen and the Hovedvej A13 highway. Then make your way through the beautiful old heath, orchard, pine trees, raised bogs, oak trees, and 100-year-old beech trees, until you reach the church of Nørre Snede Kirke.

On this 12km long stretch of road from Vester Palsgård Skovmuseum to Tinnet Krat, you can experience Nørre Snede Kirke with the famous baptismal font, as well as the watershed by the Gudenåen stream and the River Skjern.

Start by Vester Palsgaard Skovmuseum museum, which is in the middle of the forest of Palsgård Skov near Hærvejen and the Hovedvej A13 highway. Then ride along Palsgård Skov, making a stop around halfway at Nørre Snede Kirke. Continue via Nedergård Skov to Tinnet Krat, where you will find the start of Gudenåen and Skjern Å (the River Skjern) just a few hundred metres apart.

Inspiration and information for your trip

Hærvejen has its very own website with detailed information on routes, accommodation, possibilities, package trips, pilgrimages, and the story of Hærvejen. Visit the site and find more information on www.haervej.com 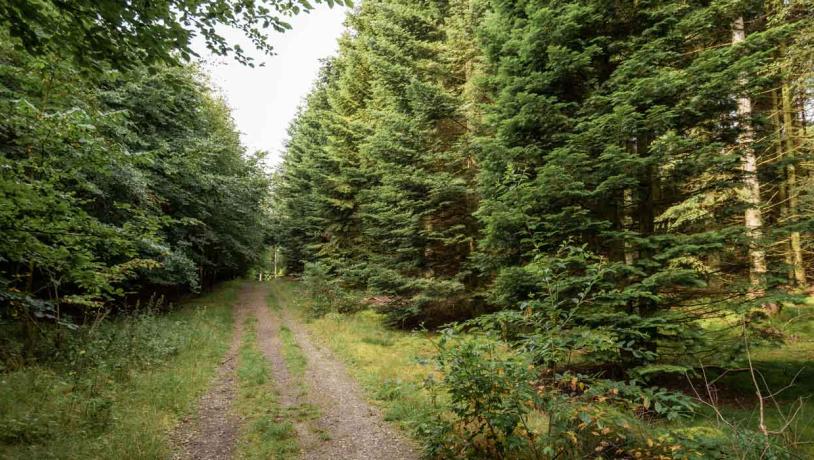