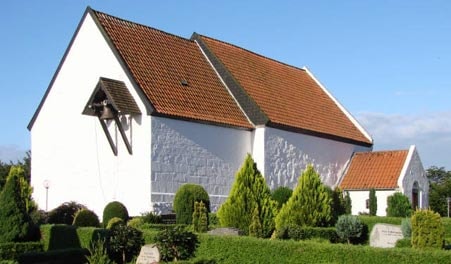 Vind church is a romantic Romanesque church from the year 1200.

The porch was added in 1863. The planned chancel arch was never built.
In 1974 the church was renovated; a new floor was put down and new altar piece with a cast iron Christ-figure was installed (By Erik Heide) along with new benches and a new organ.
The Romanesque baptismal font is made of granite.
The old church bell from the period between 1150 and 1200 is considered to be one of the oldest church bells in Denmark. It is now situated in the chancel, as it was replaced by a new French made bell in 1993.

The church is open for visitors during the day, apart from Mondays.