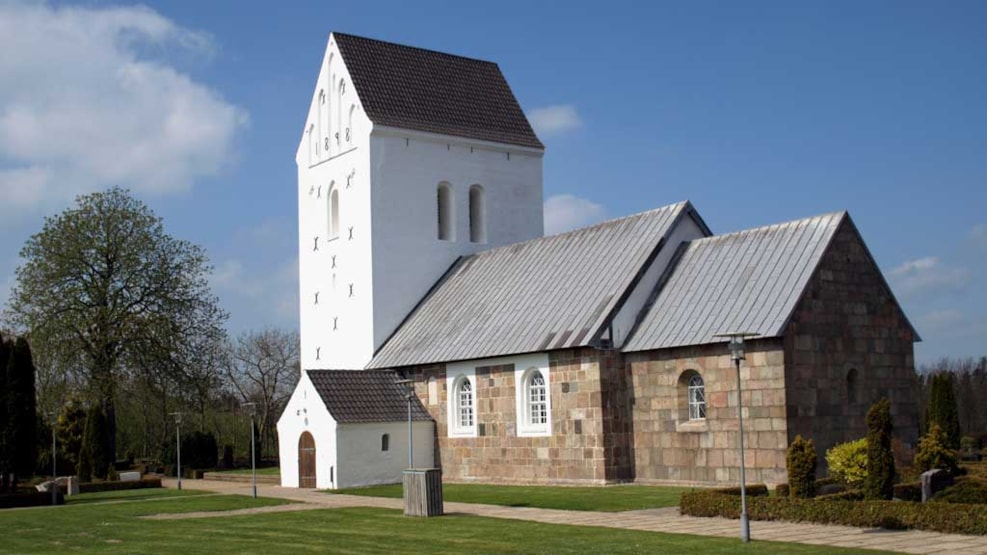 Rind Church is located in a beautiful area 5 kilometers south of Herning. It is one of Hernings churches from the Middle Ages. One can i.a. see the rag and bone man Kjælle Kasper's grave.

Access to the church must be made by contacting the staff at the cemetery - applies to all weekdays except Mondays.

Rind Church:
It is assumed that Rind Church was built around the same time as Gjellerup Church, dated 1140. The reason is primarily that both churches have over both the Southern and Northern doors an arched granite lintel, called a tympanum. There is carved a cross on each of them.

In addition, none of the two churches - like the other churches in the old Hammerum District - has a protruding edge to keep rain water away from the wall, called a window sill. Gjellerup Church is Denmark's oldest dated church, well the oldest dated building in general.

It is believed that Rind Church was built by local craftsmen and stonemasons from the area under the supervision of a foreign builder. The church still exists mainly of the materials it at that time was built of. The original church consisted only of the ship and the choir, built in Romanesque style in granite squares.

The tower and porch:
When the original tower was built is unknown, but since it has arch ceilings, it is believed to be in the latter part of the Gothic period, ie around 1500. The porch is also from the late Gothic period. It has a slightly unconventional wall of monks stones.

Rind Church was rebuilt in 1898. The southern and eastern wall was rebuilt and reinforced, and the tower's outer lower wall of granite and the upper brick was demolished. Then the whole tower was rebuilt with burnt bricks, and there was laid a new slate roof on the tower and porch.

Clock:
In 1946, the old bell cracked, and a new cast in Broenderslev, was acquired. The old bell came to Herning Museum, but when Lind Church Center was built in the 1970s the bell came back to the parish and was hung in an opening in the wall as a symbolic link between the old and the new church.

The bell was cast by Frederik Kaesler in Flensburg in 1710 and is now the only one of its kind that exists in this country.

Baptismal waiting room:
In the context of a comprehensive maintenance construction in 1993-94 where a part of the northern side of the ship and the entire south sides ashlar stone was taken down and bricked up again, and a baptismal waiting room was built. The room appears as a circular building that through the former bricked up womens entrance, is linked to the nave.

On the same occasion the windows in the south also brought back the original Romanesque form, and the roof of the porch and the tower was renewed and received, instead of the old slate roof, a new roof of tiles.