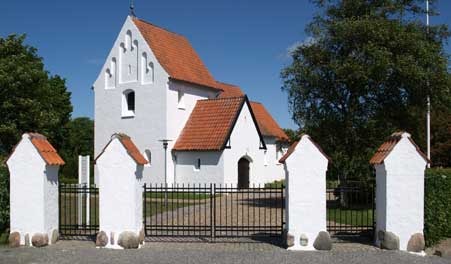 Access to the church by contacting the Churchyard personnel - this is every weekday except Monday.

Kollund Church is a new church, built in an old style in 1935, very small, whitewashed, tiled and built under the supervision of the architect, Lønborg-Jensen.

The church was hereafter inaugurated by the bishop, who urged everyone in the parish to stand together for the church.

He said i.e. that Christianity wasn't a private case, but a case for the society, and whoever wanted to belong to Gods kingdom had to live it like the life of the church.

The church is a beautiful country church with a lot of medieval styles. One would think, it would be built over several rounds, but this is a conscious choice the architect made.

It was in 1935 a nicely completed church was built for 48.000kr. It consists of apse, which is a copy of the head apse at Veng Klosterkirke, as well as chorus and ship. It ends with a tower furthest west and a weapon house on the southern side.

In the northern side there are small romantic windows, whilst in the southern side big Gothic windows. The inside also shows a switching between styles - some arches have dwarf columns, others face consoles in the corners.

The woodwork is decorated by the artist Harald Munck, Holbæk. In 1948 a glass painting was set up in the apse window made by the artist Trock Madsen from Copenhagen. It pictures Skt. Laurentius with a grid and a palm branch.

The Church's altarpiece is cut out of wood and ends at the top of freestanding figures. In the middle Christ is seen on the cross and a woman on each side. On the church's day of dedication a ship model was planned to be hung, but the smith couldn't make it before the dedication.

That is why the ship "Jylland" first came to the church later in 1935 as a gift from a farmer Marius Madsen, Kollund. The ship was given the wife's name, Eva Madsen, because it was her mother’s brother, Jakob Nielsen in Aulum, who had built the ship in his spare time.

He was an old sailor and earned his living as a shoemaker. Kollund is a very old town, which can be seen on regional maps, which for example has Kollund on the map but not Herning. The name is from the word kå, which is the word used in Jutland for a Jackdaw, and the word Lund.

These birds stay in Egelunden west of Kollund has dominated the parish - and become a landmark. Today it is more the beautiful church that is the landmark. At the Church's day of dedication they had a gathering at the schools hall.

Here the Church minister Dahl said: "Kollund church is so beautiful and good, that i felt like bringing it with me to Copenhagen". It has shown that churches in the country style have an alluring power over the city people. The church buildings draw on some of the deepest things in humans.

Others thanked for the collaboration throughout the years. In 1985 the church's first 50years was market with a commemoration service by the bishop Johannes W. Jakobsen, Viborg, with further festive gathering in the village hall. And this day was filled with sunshine and nice weather.