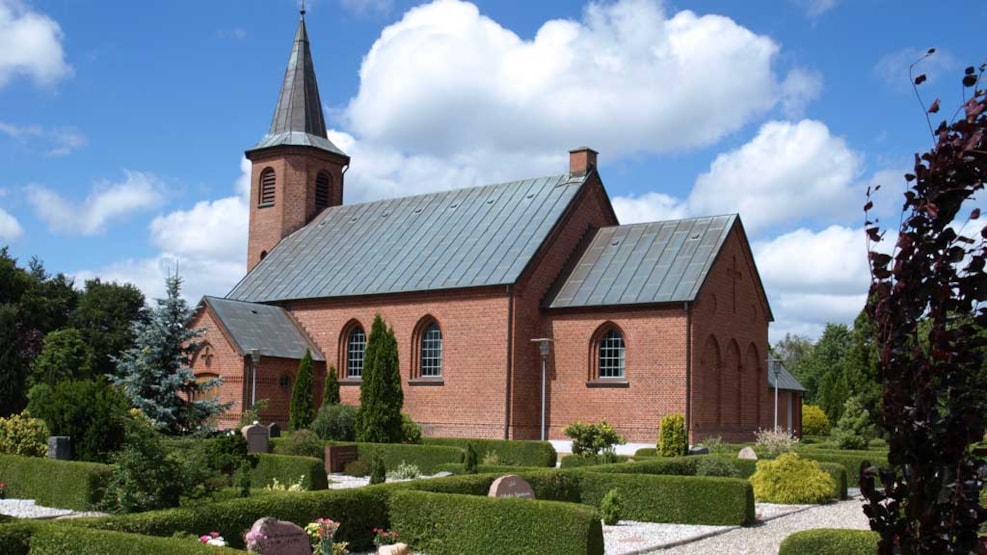 The church is built in 1891 in red bricks with a copper roof. The altarpiece is made in 15th century and origins from the old Herning church. Comprehensive restoration in 1971 for instance with Ølands stone floor. The church ship was hung in 1991 at the 100 years anniversary and created by Andreas Nissen from Varde.

Access to the church can always be arranged by contacting to the churchyard personnel - every day except Monday.

Kølkær parish is a typical example on heath cultivation followers. They spread farms became towns, and the urban communities also wanted their own church.

The plan to build the church in Kølkær started in 1877, when the application was sent into the ministry asking for permission to build a church for Kølkær, Søby and Voulund, who combined had 350 residents.

After a few years standstill the discussion of the church’s finale placement was taken up again in 1890, where the building permission was settled. Dean Blom from Gjellerup held a mediation meeting, and the participants gave the dean the authority to determine where the church should be placed. Otherwise, there would probably never been built a church in the area.

The dean and the bishop pointed in agreement on a placement close to the new school building, whereas Kølkær took the win after 13 years of consideration. The owner of Voulunds farm took the decision as a personal loss and in disappointment resolved the parish ties to Fasterholt, just as he swore never to set foot in the Kølkær church doors.

A promise he kept even at close friends deaths and funerals. He had already drawn the new Kølkær church, but didn't see it finished, because he died two years before the rights to build. His followers, royal building inspector for Jutland, architect Jens Vilhem Pedersen from Odense, thereby took over the job and made the plan a reality.

Thankful residents donated two chandeliers of ore at the church opening, and in 1941, to the 50 year anniversary, the church received a baptismal jug by the first who were baptized in the church. Throughout the years there has further come altar tapestry, altar cloth and a beautiful menorah to the gift list.

The church organ was bought in 1919 after a gathering in the church district, and for DKK 1800 they got one with 2½ voices. The organ has later on been equipped with 6 voices and subbas.

The community put a beautiful granite wall up around the churchyard in 1950 as a replacement of the original earth wall, and in 1971 the church had its first big renovation. The church benches were replaced with chairs for some it gave a big sorrow and others it gave them comfort when sitting in the church.

A new Oland stone floor with built-in heating was laid, and in the church's northern side a priest room was built and a public toilet. In 1981 the church's old slate roof was replaced with copper coating, and for the church's 100 year anniversary the church received a beautiful church ship made by Andreas Nissen from Varde.

The new church ship has the name: "Nordlyset" (Meaning: The northern light), and the amount therefore was obtained by congregation subscribed shares. The church life right now! The old Rind Parish was split (for the last time) in 1979 so Kølkær and Kollund parishes became an independent two-parish parish.

In 2003 Rind, Kølkær and Kollund parishes became the same parish with 3 parish priests, Mogens Svendsen, Ula Kristensen and Iben Johanne Thomsen. The keyword is still the cooperation between the three parishes – both as priests and meeting activity.

The combined Church magazine collects all the different offers for every audience. There are mini concerts confirmation classes with a good connectivity, bible orientation and evening lectures, as well as parish afternoons, church concerts and the annual outing for pensioners, elderly and interested.

Besides that there are a lot of other offers through i.e. Mission housing program Danmission, KFUM, KFUK and Youth Home. With space in between invitations to coffee at the Mission house after the ceremony, and at harvest church services you are invited to a church lunch in the village hall. The social dimension and togetherness is valued highly in the parish.