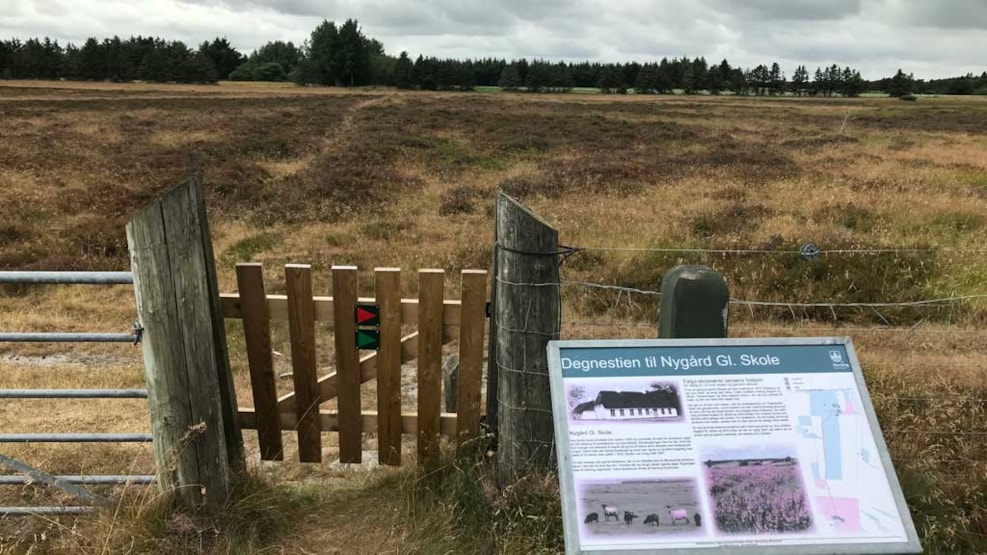 Go for a cycling trip in the beautiful nature by Ørre Hede (Oerre Moor) and Nybro and enjoy the many exciting cultural stops on your way.

The school building was built in 1870. It replaced an old building from the 1820s that has become to small for the heath's growing population. The solitary location is caused by a school law from 1814 saying that no children may have more than approx. 2 km. to school. The school was closed down in 1967 and the building is now owned by Herning Jagtcenter (Hunting Center). The schoolroom is owned by Herning Municipality and functions as a museum.

Helenes House is the last remaining of 6 farm houses called "Sammelsted By". The houses were build by Ørre Parish for the poor residents of the area in the years after 1815. The first house was build for the notorious tater king, Johannes Axelsen, and his family. The purpose was to make the poor residents help cultivate the moor in the area. Helenes House was occupied until the end ig the 1980s and now functions as a museum owned by Herning Municipality.

No less than five streams crosses each other in the area ny Nybro. The now uncovered stone bridge was built in 1893 to replace an old bridge made of oakwood.

In The Yellow House in Nybro there is a toilet and an exhibition. It is possible to sit inside and eat you lunch pack in case of bad weather.

The nonconformist chapel, Nazareth, in Nybro was built in 1989 as one of the first nonconformist chapels in the area. During the 1960s the chapel was used less and less, but thanks to the local mission society the chapel was preserved with its old inventory in 1996. in 2002, the building underwent a major renovation. The house now functions as a museum owned by Herning Municipality.

Go for a walk by Bindestowej. There is a public gravel road along the beautiful Ovstrup hede. Here is is possible to see deer such as red deer, fallow deer and roe deer. Ovstrup Moor os owned by Aage V. Jensen's Fonds.

The track across the moor between Nygård Old School and Helenes House is called "Degnestien". The track of the schoolteacher. The track is slim and back in the days it could be impassable because of water. Some places on the track the moorland farmers made a little forces, so that the schoolteachers could go to school without getting wet feet. The track is marked with red piles and there are information charts.

On the stone, which was set in 1917, you can read the text: "Here was Axelhus, where Blicher for many years ago looked inside a window and got inspired to write the famous novel "Kjælringeliv".

The shelter and canoe area lies in beautiful surroundings by Storåen.