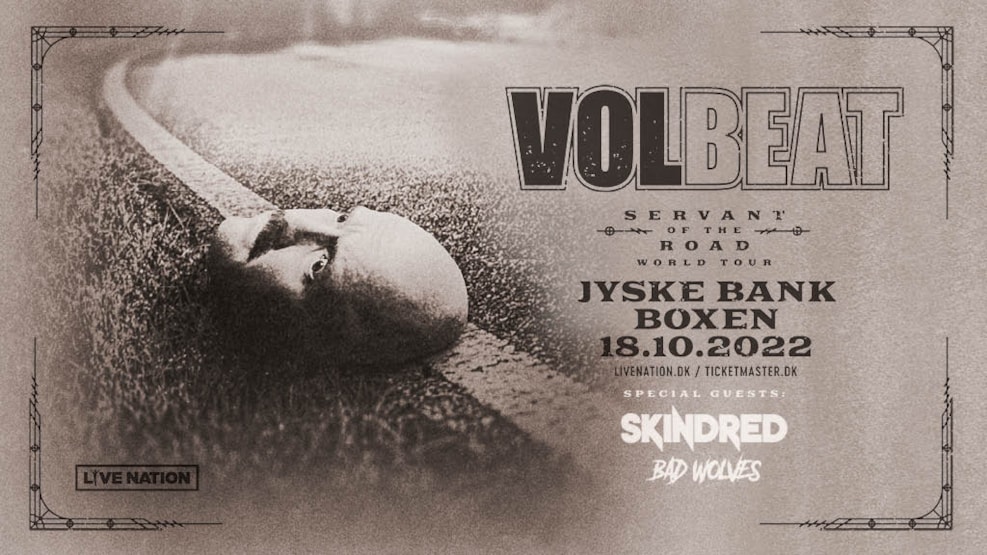 The Danish rock band Volbeat plays its first concert on Danish soil in almost three years, when the group returns to Jyske Bank Boxen in Herning on 18 October 2022. The visit is part of the band's 'Servant of the Road World Tour 2022', which, characteristic of the group, breaks several records.

Volbeat will visit 33 arenas around Europe when the group sets out on its 'Servant of the Road World Tour 2022' this autumn, and as something new, the Jyske Bank Box has just been added to the extensive list.

- We are very happy to be able to add another Danish concert to our 'Servant of the Road' tour. It has been a bit of a puzzle to get it all to fall into place. It has been almost three years since we played in Herning and in Denmark in general, so it is going to get crazy, states frontman Michael Poulsen.

Breaks three records
Volbeat breaks several records with 'Servant of the Road World Tour 2022': The tour offers the largest number of tickets on a European tour, and it is not only the biggest tour in the band's history, but actually the biggest arena tour ever for a Danish rock band. It ends with a show at the legendary Wembley Arena in London shortly before Christmas.

Volbeat, which embraces genres such as hard rock, classic metal, glam, punk and rockabilly, has wind in its sails to that extent. As recently as July this year, the band could celebrate that its sixth album 'Seal the Deal & Let's Boogie' (2016) had sold 120,000 copies. As a result, the album has sold no fewer than six platinum records and is at the same time the most popular Volbeat album in Denmark.
The popular band, which consists of Michael Poulsen (guitar/vocals), Jon Larsen (drums), Rob Caggiano (guitar) and Kaspar Boye Larsen (bass), will visit Jyske Bank Boxen on 18 October 2022.