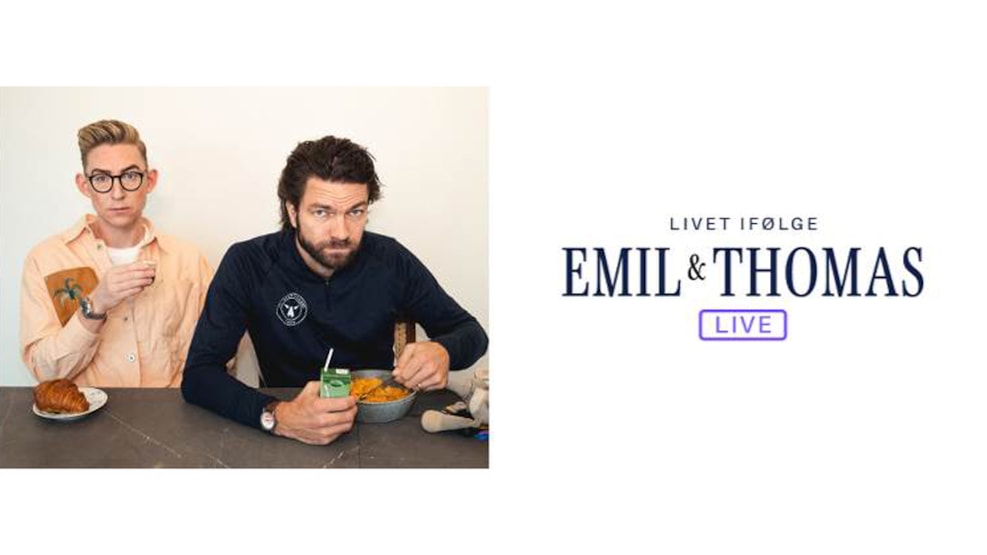 Life according to Emil & Thomas Live

"Life according to Emil and Thomas" is a podcast with the two friends Emil Thorup and Thomas Skov. They are very different, but somehow they have found joy in meeting a couple of times a week and turning life big and small. The podcast premiered on Podimo last year - and since then it has only gotten bigger and bigger. So the podcast.

Emil and Thomas share experiences from life, but with the understanding that they live two very different lives. Emil lives the sweet jet set life with city trips every weekend, big arm movements - financially and in general and caviar with his famous friends. Thomas has three children, a wife, a house and, on the whole, a life that is completely different from Emil's. But even though they are different, there are many things in each other's lives that they can reflect on - and you rarely leave a conversation between Emil and Thomas without having gained a new perspective on some things - perhaps you have even become a slightly wiser.

Emil and Thomas have the declared mission that you should become both smarter AND dumber by listening to their podcast - so it ends in zero - but most of all you should be entertained and occasionally even laugh a little. Emil and Thomas are extremely honest, sometimes maybe even a little TOO honest, when they talk about their experiences with fleshlights and buttplugs - and now we come to a topic that takes up a lot of their podcast - namely sex. Experiences are shared diligently, both about having had a lot of sex with many different people - but also about how it feels to have reached an age where you often have side thrusts before you have an ejaculation. The goal is to entertain all the time, but also to make it easier for the listeners to talk about some of these topics.

In the show "Lifet According to Emil & Thomas LIVE", Emil and Thomas invite both seasoned listeners inside, but you are also welcome to that extent, even if you have never heard a second of the podcast. The evening offers a conversation between Emil and Thomas - but the audience also has the opportunity to get answers to any questions they may have.