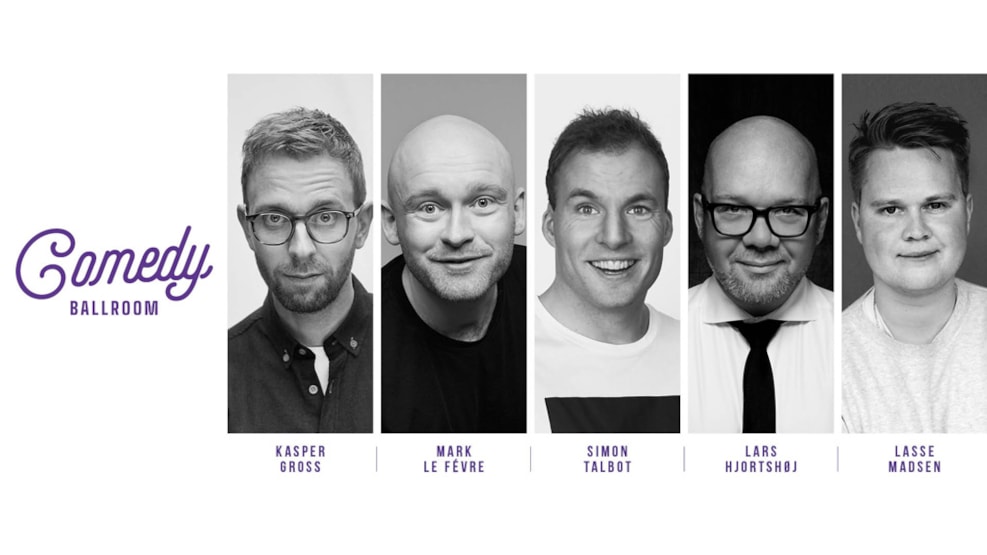 September and October have become synonymous for many with Comedy BALLROOM, where five of the country's biggest comedians team up and head out into the country.
Comedy BALLROOM is a different way to experience stand-up. The audience gets a distillation of the country's absolute best comedians; each with just under half an hour to deliver their show. The performance style is fast and energetic, a demanding discipline in which the comedians mobilise their very best material. With the 5 stars on the bill, entertainment from the top shelf of the Danish comedy scene is guaranteed.

Simon Talbot is one of Denmark's all-time comedy darlings, delivering solid entertainment to the people with his enthusiasm and exuberant storytelling joy. Simon entertains with stories based on everyday life and his life: from computer games and too short Achilles tendons to growing up as a Jehovah's Witness and his big money Irish father. Simon gives the audience his own crumpled version of life and is met with standing ovations and stomach-churning laughter. Simon Talbot's magnificent Denmark tour "Optur", his fifth one man show, played to full houses in 2021 and 2022.

Mark le Fêvre. Danish charmer and one of Denmark's most sought-after comedians. You know him as Lasse Rimmer's whipping boy in the TV2 success Stormester and as a guest in programmes like Klipfiskerne, Menneskekender and Natholdet. You're also likely to have seen him in the country's biggest venues with his two critically acclaimed one-man shows Bøvl from 2019 and Heldig from 2022, which he has performed to sold-out crowds across Denmark.

Lars Hjortshøj's huge talent for comedy is undeniable. It has paved the way for a long and impressive career in both TV, radio and film. But it has always been stand-up that has been the focal point of his work. His personality on stage combined with an eminent ability to write and deliver jokes puts him in a class of his own. Lars Hjortshøj and Benjamin Koppel are currently presenting the new nationwide musical comedy tour 'Jazz & Jokes', where comedy and jazz mix blood.

Kasper Gross is currently working on the series Minkavlerne, which won a ZULU Award for TV Series of the Year in 2020, where he is both scriptwriter and lead actor. The TV success is in its third season, and boasts another nomination for TV Series of the Year in 2022. You may also know him from TV2's series Er vi ikke snart?, or as a regular host on Tobias Dybvad's tour Er det ikke dig fra Dybvad?

Lasse Madsen. It's hard not to smile when Lasse Madsen shares videos on Instagram where he lovingly pokes fun at everyday situations and stereotypes that most people recognise themselves in.  The videos reveal Lasse not only as a great comedic talent, but also as a true people-watcher. But he is much more than viral videos on the web. He is also an eminent performer with a special connection to his audience, and it is on stage that he feels most at home. Lasse Madsen's first oneman show, Forelsket, received four hearts in Politiken.

Don't miss a rare opportunity to experience the top of Danish comedy.