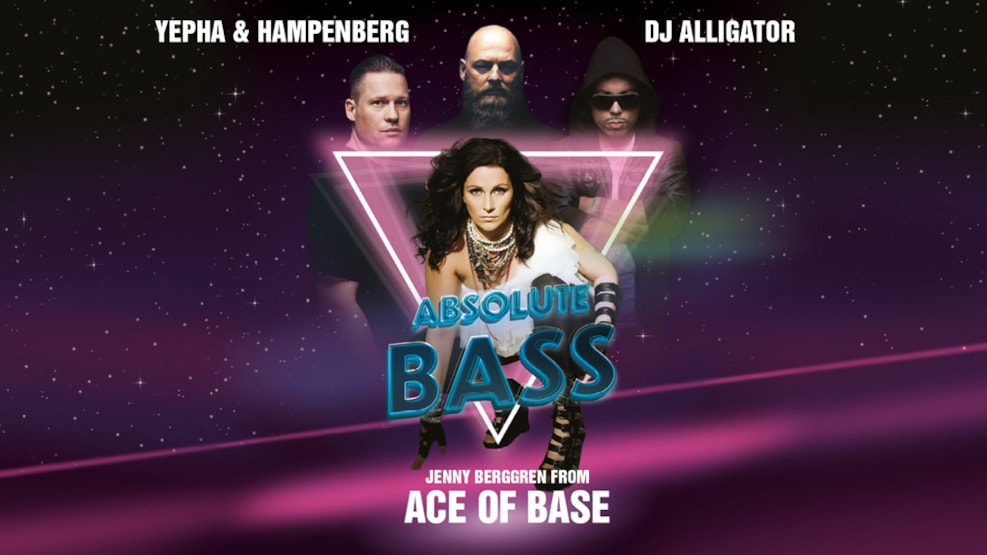 Basel-loving audiences can once again look forward to a rhythm-heavy party night with 'Absolute Bass' when the concept returns to MCH Herning Kongrescenter on 18 February. Ace of Base lead singer Jenny Berggren, DJ Alligator and Yepha & Hampenberg provide the evening's rhythms.

The party in late summer 2021 turned up the heat, when 'Absolute Bass' debuted with a jam-packed concert hall with 2,400 celebratory audiences in MCH Herning Kongrescenter. Now the format returns with new bass-enthusiastic artists. The concept is the same – nostalgic rehearsals with electronic hits and dance.

FESTIVE LINE-UP
A bass-heavy circus of madness awaits the audience when DJ Aligator once again thunders onto the stage for Absolute Bass. More than 20 years ago, the now world-famous DJ released the original 'The Whistle Song'. The song became a huge success, selling more than a million units. Most recently, the song has been given new life with the title 'The Whistle', which was created in collaboration with the international super DJs Steve Aoki and Timmy Trumpet.

Afterwards, the world-renowned pop singer Jenny Berggren, who was the female vocalist in the hit Swedish 90s band ACE OF BASE, who is behind mega hits such as 'All That She Wants' and 'The Sign', will perform. For 'Absolute Bass', Jenny Berggren performs solo with the successful band's numbers.

The duo Yepha & Hampenberg round off the evening with party hits such as 'Skub Til Taget' and 'Det Stikker Helt Af', which have set dance floors all over the country in motion since the 10s. Between the artists' performances, a house DJ provides the rhythms in the hall.

Absolute Bass ft. Jenny from Ace of Base, DJ Alligator and Yepha & Hampenberg can be experienced at MCH Herning Kongrescenter on Saturday 18 February 2022.

EXPANDED BAR CAPACITY
On the basis of the experience from last time, this year we will of course also expand the capacity in the bars in the evening, so that no guests will be missing anything.

DO YOU WANT TO BE A VIP GUEST?
In the 2023 edition, it is also possible to purchase a VIP experience in a separate lounge area outside the concert hall with ad libitum drinks, snacks and dinner at the end of the evening. Draft beer, house wine, soft drinks and selected drinks are served all evening in the lounge area from one hour before the start of the concert until the end. It is possible to bring one drink at a time from the area into the concert hall. The ticket can be purchased additionally when you buy a ticket for the concert. NOTE: The ticket for the VIP lounge is not valid for the concert. The concert ticket must be purchased separately.